I read about this method of cooking over at Dani's blog (in South Africa) and thought I'd adapt my own box cooker with what I had on hand to see how this works.  I took a large box and nestled a medium box inside surrounded with packing peanuts.  The bottom of the medium box was stuffed with some shredded newspaper .. then I placed my filled cast iron Dutch oven full of stew that I had prepared and brought to a boil.. wrapped in a large towel in on top of the newspapers .. packed more paper and another towel around the pot .. closed both boxes .. and covered it with a blanket and a few pillows at 10:15 AM.  At 4:00 PM I checked and it was cooked but the meat needed to be more tender so I brought it to a boil again .. packed it up and left it until dinner time at 6:00 PM.

Total cooking time on the stove with browning the meat and bringing to a boil twice was about 25 minutes ... thus saving about 2 hours worth of fuel.    The packing peanuts at no time got hot as the majority of the heat stayed in the Dutch oven insulated inside the medium size box.  Here are some links that explain the process and give better directions.  I hope to have Hubby make me a proper box as this is a nutritious way to cook AND save energy. 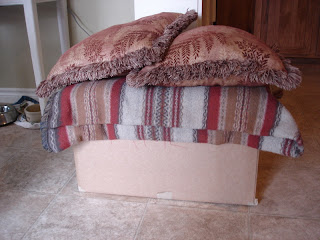 Heat Dutch oven and add a tablespoon of cooking oil.  Have beef prepared by drying well and dredging in flour.  You can salt and pepper the meat a bit.  Cook in three batches, browning on both sides.  You may have to add a little more oil.  When all of the beef is browned, add it back to the pan along with the potatoes, carrots and onion .. stirring.  Add about 12 ounces of beef stock.  (I added 6 ounces of beer and 6 ounces of water).  Add thyme and bring to a boil.  Adjust salt and pepper.  Boil for about 10 minutes with the lid on.  Place the hot pot on a old thick bath towel and wrap the edges tightly around the pot.  Carefully place the hot pot inside the well insulated medium box and stuff more newspaper and a towel over .. around the covered pot.  Close up the box.  Add another towel .. and close up the large box.  Cover well with a blanket and some pillows ... and allow to sit for about 5 hours .. check again .. if the meat is not tender, bring to another boil and reseal the same was as before.  I read somewhere with meat dishes to bring to a boil before serving.  Our stew came out of the box piping hot.

Here are some links for more information:

Oh .. so waiting for the final bit of 'white stuff' to melt!  Our yard is snow free for the most part .. except .. for the last little holdout in the veggie garden. 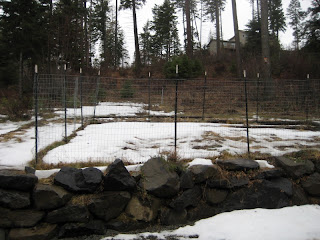 Meanwhile .. I've got the start of my plant nursery set up in the dining room. 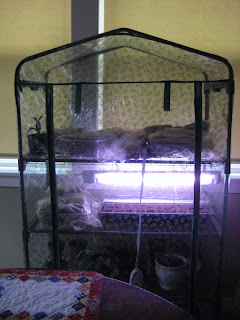 This little greenhouse is equipped with a heater .. albeit .. it sits directly over a heater vent in the floor .. and has the use of my heating pad .. and a grow light. 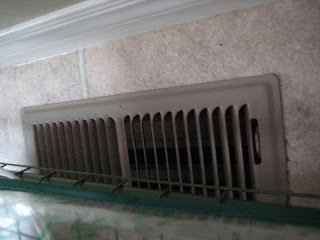 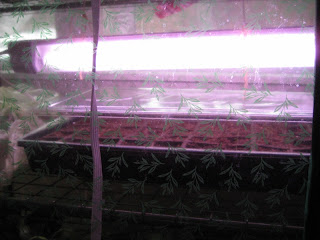 A few things are sprouting .. and my tropical plants seem to LOOOOVE the attention (read warmth and frequent water mists). 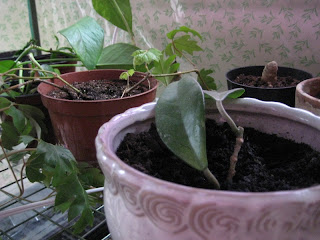 Our neighbors have graciously said I could use some of their outdoor greenhouse so I placed my wireless outdoor thermometer inside of it .. and from the comfy of my living room I can check the temp 24/7.

Having been everything green deprived for the past few months .. this little nursery is a JOY!
Posted by Mrs. Mac at 1:06 PM 11 comments: 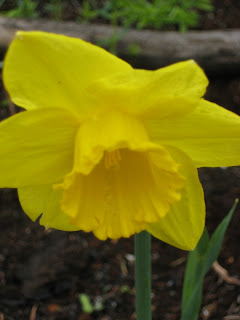 It's just been a bit dreary in the North Woods that my creative side has been stifled .. 'stuffed up' .. er .. whatever .. As soon as the sun decides to peek out from under the ongoing veil of storms .. I'll be back posting .. and I have a blog award to post.

Yesterday I managed to get to the garden center and buy some seed starting soil and peat pots . .. maybe that will get the fire going in my heart for SPRING!