Poisoned In My Childhood

Yep ... it's true, just ask my mom.  Back in the early 1960's we lived in a somewhat rural area in Utah.  Dad had gotten a big box of beautiful ripe apricots from someone ... these were picked from a farm or commercial orchard perhaps .. unbeknown to me ... (at the ripe old age of five) I ate some fruit directly from the box without the benefit of washing first.  Boy, they were good tasting apricots ... who could stop eating just one. Two, three, four, five ... apricots later.  Within a day I began to get SICK ... and WEAK ... and had to eventually go to the doctor.  He gave me some awful big-old-chewable-disc-shaped iron pills (the size of a nickle) .. to take daily.  I believe he said I was anemic (fuzzy here .. many moons ago).  I did feel ill for weeks .. perhaps months.  I couldn't sleep at night ... I would get sweaty and chilled .. the only comforting thing to do was take a warm bath for hours it seemed.  No sleep .. restless .. ill .. to make matters worse .. the doctor then prescribed codeine to help me sleep at night (huh).  Well, I became rather attached to this happy medicine until my mom made me quit taking it cold turkey ... the whole incident is still a painful memory after nearly 45 years.   I can only imagine what type of pesticide was used back then .. this was before the EPA started regulating such chemicals. 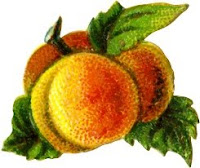 Soon .. we'll talk turkey about genetically modified (GM/GMO) foods ... aka Frankenstein Food ... and how some GM seed has pesticide in its DNA.

clip art from public domain here
Posted by Mrs. Mac at 5:00 AM

I shudder to think what horrifically chemical laden foods I have eaten in the past. It boggles the mind to think that we, as a society, have chosen to grow and eat "perfect", nutritionally defunct, and poisoned fruits rather than those containing a few blemishes.

I, too, was poisoned as a child, but by my mother & dentist. They believed fluoride was wonderful. Yeah. My baby teeth rotted out of my mouth (& i've so many other issues because of it as well).

I think part of the problem with the complacency of folks about chemicals is because the DON'T kill folks quickly. Many of the illnesses we have today are probably due in part to all the chemicals used in our world. But there is no direct correlation & therefore folks tend to write it off.

My mother recently asked if i still eat a treat from childhood. I responded that i do not because i do not want the chemicals involved. I wasn't being rude or trying to challenge her. The item she was talking about didn't have the chemicals when i was a child that it has today.

She lamblasted me saying that you can't be so over-cautious. She said, "I'm 71 years old & those things haven't killed me yet." The problem she's overlooking is that they ARE killing her. She has lupus & is in frequent pain & takes a lot of meds. She has other issues as well. All these things are killing her - slowly. (I know we are each going to die. That is how it is. But i'd prefer to be in the best health i can be until then rather than live in a lot of pain & on drugs.)

If it would kill people quickly it wouldn't be used.

1. People wouldn't stand for it; but

2. To kill off the utilizers too quickly means you no longer have a market (for frankenfood, pharmaceuticals, mammograms, surgery, etc.)

I too know all too well how this poisoning wreaks a healthy body and my heart has much compassion for you. Katherine and Mr. H's comments have left no need to elaborate at all. As unfortunate as it was for you, the result of the experience will be extended health for your family and you can feel proud of that. Peace